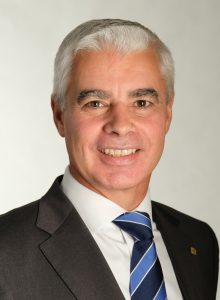 The great Russian writer Leo Tolstoy once observed, “Everyone thinks of changing the world, but no one thinks of changing himself.” But with all due respect to the man who penned “War and Peace,” Oscar Sanchez is a living and breathing embodiment of the notion that it is possible to do both.

The president and CEO of Kyocera Document Solutions America values his company, in part, because it has encouraged his penchant for trying new things, taking occasional risks and defying the status quo. In the entirety of his 25-year career, which included global positions in Spain and The Netherlands, Sanchez has never felt like he was stagnating and not progressing.

“I think that companies and industries are constantly evolving, and history has shown us that only those companies which understand the changes in their industry and reinvent themselves are the ones that prevail,” said Sanchez, a 2020 ENX Magazine Difference Maker. “It is not that I consider myself a visionary, but I am constantly looking for new ways to do things and challenging my team to open their eyes and entertain new ideas.”

As to Tolstoy’s thoughts on personal change, Sanchez has proven he is not above seeking a different course, even after traveling a long path. He studied law in Spain at Universidad Complutense de Madrid, but deep down in his heart, Sanchez held an affinity for the corporate world. So he went back to school for business, and later finished his MBA study at UCLA’s Anderson School.

There was a subtle driver behind Sanchez’s pivot. His father was a copier distributor in Spain and had a deep passion for the industry. Sanchez admits his father is to “blame” for his foray into the imaging world. The elder Sanchez, not surprisingly, has been a significant influence on his son’s personal and professional life.

“His work ethic, his sense of responsibility and passion for his work always made him a role model for me,” Sanchez observed. “He has very humble origins and had to leave school when he was 12. It is admirable what he accomplished through hard work and dedication. For years, it was difficult for me to live up to his standards, but over time I realized how much that helped me.”

Throughout his career, Sanchez has found that his Kyocera teammates embrace his demanding yet caring persona. Yet, when one works in a supervisory position, as Sanchez did as a general manager for 13 of his 19 years with Kyocera Spain, it can be difficult to ascertain what people really think about you. Upon his departure, Sanchez received many expressions of appreciation for his efforts from teammates, which he found most gratifying.

“That moment reinforced my belief that for organizations to work, you need to have a strong commitment from everyone in that organization,” he said. “But as head of a company, commitment is not something you demand; you need to earn it. Feeling that I accomplished that during my tenure in Spain was my best reward.”

Sanchez took the helm of Kyocera Document Solutions America in September of 2018, and he spent much of the following year at the start of a journey to transform the company. He has assembled an impressive group of executives to set the foundation for future growth. While COVID-19 has cast a pall over the entire business community in 2020, Sanchez believes it is important to keep a long-term perspective and not make decisions focused on just the short term.

“We need to manage this situation, taking care of our people and our customers, and keep on building the type of company that we want for the future,” Sanchez said. “I strongly believe this is a moment to make a difference, and the decisions we take now will determine what we will accomplish in the future.”

Sanchez believes the best building blocks for the future entail treating every day as a new start while resisting the temptation to rest on one’s laurels. “I like to think that the best for my company, and for me personally, is yet to come,” he noted. “That gives me the motivation and the energy to keep on working hard to perform better.”

An ardent reader of history books and a sports enthusiast (especially football, a.k.a. soccer), Sanchez and his wife, Maria, have been married for 25 years. She has been his No. 1 fan and moral supporter, having made many personal and professional sacrifices as Sanchez’s career has relocated them from their native Spain several times. They have four children—Maria, Ignacio, Blanca and Rocio—and enjoy traveling around the world.